Guide by: Metaphorical_Lurker. Click here to go to the original source.

I get that many people do use farmables to clear ToA 100 but I’d just like to re-emphasize the fact that a farmable team was used here.

Also note that not all my monsters are at 6* and it is not essential as well.

I will go through briefly what you should take note of from ToA 91 to 100 so that it wouldn’t be a pain to your eyes. But sadly, I did use a couple of unfarmables for 91-99. Take lightly.

First off, here are my stats (Just skip this whole chunk if you’re not bothered. I know it’s difficult to read all these stats and shit):

I’d like to specially mention a few monsters. Firstly, Shannon and Bernard (Shannard) combos are really strong and of course if you can reach ToA 91, you already have them both. But I need to emphasize on the Shannard combo because it will carry you through many levels easily. And next is Baretta. This fusion mob was the best investment I have ever made and possibly my best monster for ToA. I would definitely make a second Baretta for no reason. Ahman is also the most efficient healer in my opinion. I only used Bella for one stage because I needed a def debuffer against a fire type which Bernard fell short. 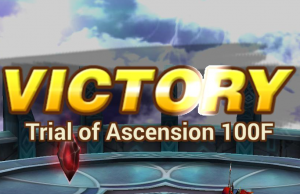 Let’s start with TOA 100 because of reasons.

Stage 1 all you have to do is CC all the Acasises (?) or don’t bother CC at all. If you don’t CC, all the Acasises will go full retard and buff up. That’s when you start to CC. Kona should heal whenever anyone crucial (like Shannard) gets a heal debuff. For stage 2, maintain CC on all the Vanessas. If one Vanessa is stunned, don’t hit it with a Despair/Turbulence but hit another Vanessa instead. Cleanse whenever Shannard gets def debuffed. This stage requires a bit of planning but you should get through.

On the boss stage, kill both towers first. That’s right. Both towers. AoE and make sure to keep the right tower at bay. Turbulence it as needed. Once both towers are down, you have already won. Shannard’s buff/debuff combo makes sure the boss gets out-dpsed even by Shannon’s normal attack. Def buff reduces Fatal Flame’s damage thus reducing its heal amount while def debuff just wrecks. Boss’s Almighty passive sucks as well though. I literally felt no difference in his damage/def even after giving him about 200 Almighty stacks (if that’s even possible).

Now I’ll briefly go through 91-99 and the few tougher stages will be in more detail.

As you step into 91 for the first time, you will definitely feel the vast gap in difficulty from 90. HP of monsters get way boosted and their damage gets trucking. For this stage all I can say is that you should aim for Dark Lich, then Fire, then lastly Wind. There isn’t any real strategy here except hope that you CC someone. Once Dark Lich is down, half the battle is won. The Fire Lich may get annoying from his extra turns so you have to drink some RNG potion to prevent that.

This stage is probably where most people quit ToA altogether and start to have second thoughts about playing the game. It is extremely difficult because the Cahules just speed each other up to no end. Think of it as stage 9 of a Garuda SD when you’re level 30ish. Main idea is to get CCs in. Baretta does it exceptionally well here as he damages a lot while he CCs. This is also the only stage where I use Bella for her def debuff because Bernard doesn’t do it for the Cahules. But most importantly is Bernard is there for the initial speed boost. Your game changes a lot with that. Kill off Yen first and try to CC the Cahules. Ahman should be able to lure away one Cahule most of the time. It is important to land your Phoenix Fury twice else you’re no where near winning. Malaka is great for his AoE atk debuff and slow as well (Aria is equally good here). Take note that my Malaka isn’t skilled up at all.

Do ask me if you need more help on this stage.

I don’t really know what to say about this stage but just hope your Despairs go. The Infernos are a pain in the ass so I used four Despair users, AoE slows and ATB reduction. I killed in this order: Wind, Light, Fire, Water and Dark. No apparent reason, but I just aimed whoever had the least HP or had more debuffs on.

Same as in 93 because the need for Despair procs are much much higher here. This stage is definitely the second hardest (first being 99) and the fight here gets very annoying. What you should take note of is definitely aim the Teons first. CC the Bellas and slow the Mihael. When one Teon uses his revive only to heal, take the opportunity to kill the other Teon. This is to make sure their revives are completely destroyed. Then kill the second Teon, Bellas, then lastly Mihael. Mihael is extremely slow so you should not find her annoying. CC her with slow debuff, stuns, provoke, etc.

This stage is easy as fuq. Free 50 Crystals!

Another bottle neck stage. I used Acasis and Bernard here to take all the hits from the Salamanders while giving Baretta more time to use a second Phoenix Fury. Kill the middle guy (forgot who that was) first then slowly go through the Salamanders. AoE slow from Malaka is exceptionally important here, so as the AoE ATK debuff from him as well. This stage will require a few tries to attract extra RNG points. Good luck.

Nothing much here. You don’t need immunity like I used in this stage but I just took him cause quadruple Zaiross attacks will kill, for sure. I never encountered a chance to use the immunity anyway since I had the two on permanent lock down. Easy stage. What did I expect lol.

That’s right. 4-man team. My Acasis died on the second stage for some reason but the boss stage was pretty easy.


I am so sorry for those who lack a Verde because he is so crucial in my success here. Acasis is there to absorb three to four rounds of raping while Ahman should try to keep Leo on provoke lock down. I knew I had won when my Acasis did a second bubble. This requires the opposing Verdes to be on almost full time CC while Leo must not kill my Malaka else he will destroy Acasis. Not easy, but the margin to the winning side is pretty slim as well. Go for the Verdes first, then Leo. I believe instead of Verde you could use Bernard in place as he brings a nice atk debuff kit and he, along with Acasis and Malaka will buy time for Baretta to release a second Phoenix Fury. That’s all.