Guide by: zequeins. Click here to go to the original source in the com2us forum

TL;DR: Chasun is overpowered and require rebalancing. Here, I addressed her fundamental design problems, Chasun in comparison with other healers, common arguments why she is ‘balanced’, common tactics to defeat her and how disproportionate they are, and the 3 traits that I think is the reason why she is overpowered. 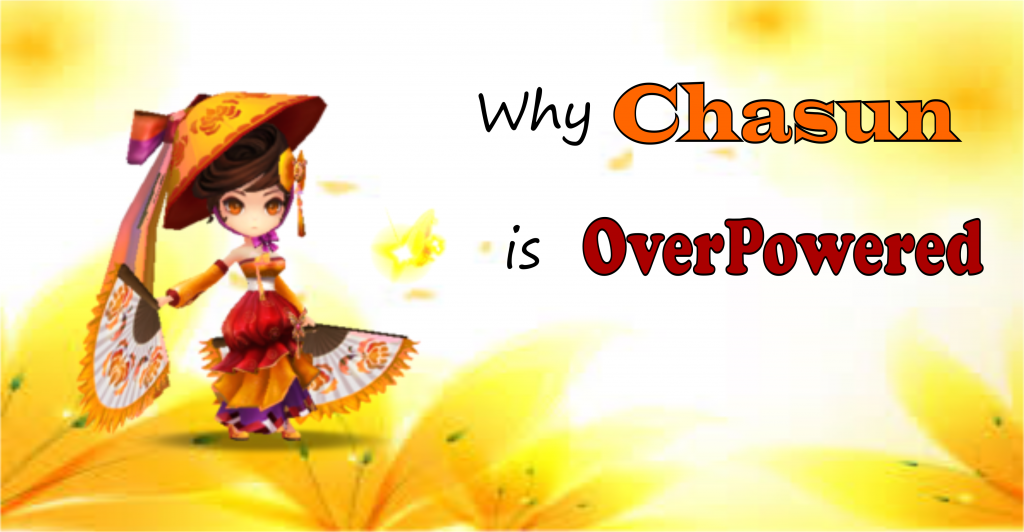 Chasun is overpowered and requires rebalancing. Vio proc is only half of the problem, the other half is her fundamental design.

Skill 2-Amuse: 20% heal based on her hp and buffs attack at 4-turn cd (max 25% heal and 3cd). Heals based on her hp, which considering she has huge base hp (more than Ahman or Ramagos, about the same with Arnold) and the most common way to rune her (all hp% with spd hp hp second), means it heals for a lot. Unlike Ariel or Belladeon’s heal, the recipient’s hp is moot as more often than not she would heal more based on her own hp than recipient’s hp. It also comes with an attack buff, which makes leaving Chasun alive until last dangerous, as in the meantime her teammates will hit you with boosted damage. To top it off, while the Atk Buff can be considered an equivalent for Belladeon’s AtB increase, Chasun has shorter cooldown.

Skill 3-Fallen Blossom: 5-turn cd (max 4cd) A unique skill, useless when alone, powerful heal and AtB increaser anywhere else that also ignores Recovery Block effects. While in theory it has weaknesses, in practice it is more often than not a full heal that also increases AtB, all while having shorter cooldown than Lumirecia’s full heal. As well, its AtB copying effect can often give Chasun a near-full AtB, gaining her an extra non-violent turn, effectively further reducing its cooldown.

With her skills, Chasun has a heal for every patient. Amuse for those with low hp (which can easily heal them for more than 70% of their hp), Fallen Blossom for tanky ones (assuming she’s not damaged herself, but even then her Amuse heals even tanky ones significantly). In contrast, Belladeon and Ariel’s heals are recipient’s hp-based, meaning they would have more trouble healing those with low hp.

One of the biggest reason Chasun is overpowered is her 2 heals with short cooldowns. Amuse has a 4-turn cooldown while Fallen Blossom has a 5-turn cooldown, which could be improved to 3 and 4 turns respectively. This gives you a very short window to nuke her down which gets even shorter when her skills are fully upgraded and she’s on Nemesis, and if her Vio procs, you’re back to square 1. And even if Vio doesn’t proc, you have a 2-turn window to nuke her before she alternates using Amuse and Fallen Blossom.

B. CHASUN COMPARED TO OTHER HEALERS

Ahman (Light Bearman): 12% group heal based on his max hp everytime he crits. On paper, he would heal more than Chasun. In practice, most Ahmans would sacrifice slot 4 for Crit Rate, meaning he would have much less hp compared to Chasun, and while Ahman does heal for more per turn compared to Amuse, at max upgrade Amuse comes very close to Ahman’s healing, and that’s before putting her Atk buff and Fallen Blossom into the equation.

Ariel (Water Archangel): and 30% group heal +45% over 3 turns at 6cd (max 36% +45% over 3 turns at 5cd). Powerful single heal and group heal, one of the handful of monsters with 2 heals. Fortunately, he doesn’t make the enemy team more dangerous with his heals and his group heal takes a few turns to reach maximum value, although if you’re unlucky he might dispel some of your more important buffs.

Belladeon (Light Inugami): 30% group heal at 5cd (max 36% at 4cd). Such great utility for an easily farmed monster. Less meat (hp) but more stringy (def). His Def break is arguably inferior to Atk buff as it relies on the enemy not resisting it and the prevalence of Immunity and Cleansers. At the very least, he could only heal once every 4 turns at best.

Chloe (Fire Epikion Priest): 50% heal at 5cd (max 3cd) 25% and 15% heal at lowest hp ally at 4cd (max 32% and 20% at 3cd). Another Arena staple. Protects your team with her Invincibilty and Immunity, but not as good at keeping them healed. Higher base hp than Chasun, but since most Chloe stacks Spd on Swift, in practice she’s much less durable.

Eladriel (Wind Archangel): 50% heal at 5cd (max 3cd) and Resurrection at 8cd (max 6cd). Makes a great partner to Chasun, which makes her tankier and heals for more, and could raise her back if she dies. Still, his Resurrection comes at a pretty hefty cost, and could make him open to finishing blows.

Lumirecia (Water Sylphid): Full heal at 6cd (max 5cd). Comes with a ‘true’ full heal compared to Chasun’s Fallen Blossom. On one side, it doesn’t need any teammate to be usable. On the other hand, it’s subject to heal block and has longer cooldown.

Praha (Water Oracle): 50% group heal at 6cd (max 60% at 4cd). Comes with a powerful AoE dispel, and her heal is one of the most powerful group heal in the game as it heals instantly (compared to Ariel’s heal over time). Same base hp with Chasun and higher defense. Fortunately, 4cd is sufficient time to nuke her down, and her having to Sleep (without Immunity or Cleanse) effectively adds a +1 cd.

Rina (Water Epikion Priest): I put her here because some says that ‘Chasun is the Rina of lategame’. She’s not. Rina faces the same problem as Chloe, her heal couldn’t be relied on as primary heal. Unlike Chloe, that’s all there is to her, she can be SAFELY ignored until all her teammates are down, she doesn’t add anything to the team aside from her mediocre heals and perhaps some poke with her first skill.

1. She can’t do anything but heal, she has no shield/immunity/invincibility: A common fallacy some of us would call Fake Balance. To quote, “If a character has a move set with a few overly powerful moves, the counterbalance to this may be to have several moves be near-useless. But the existence of bad moves does nothing to reduce the effectiveness of the good ones. A skilled player is likely to exploit the good moves while ignoring the useless ones” Chasun may not have shield/immunity/invincibility, but she heals exceedingly well; too good for her paygrade in fact, if not the best healer currently. And she DOES something else other than heal, she buffs atk (exceedingly dangerous if the battle goes long enough) and increases AtB (not everytime, but often).

2. Chasun is useless on c3+: Just because she’s food at higher level doesn’t necessarily mean she’s balanced in the first place. Just because you have a 1000% c.dmg monster that can one-shot Briand doesn’t justify the statement “Briand so squishy because *I* can one-shot him”. Again, I bring attention to the problems with her base design, especially in comparison with other healers.

1. Superior tactics: Again, the problem is how disproportionate it is in effort. You have to hit her teammates lightly to bait her heals first (especially FB), then when her heal is on cooldown, unload the pain. In the meantime, your buffs will expire, her teammates will counterattack, her atk buff will only increase her teammates’ damage, and if her Vio rune procs, you’re back to square one, and there’s no guarantee you can weather her teammates’ atk-boosted damage.

2. Leaving Chasun for last: Subset of ‘Superior tactic’ I mentioned above, and sometimes it is necessary, but the problem is that leaving Chasun for last means she can keep buffing her teammates’ attack, which can be exceedingly dangerous. In many ways, she is a priority target that needs to be killed immediately, yet she’s so tanky it takes disproportionate effort to take her down.

3. Single target one-hit nuke: I’ve seen videos of high-end Kahli one-shotting Chasun. But again, it’s the disproportionate effort required to take Chasun down. If you can kill a 40k base hp Chasun in one shot, you most likely can one-shot almost anything else in the game. When you have a one-hit kill in your arsenal everything looks easy, and when a suggested tactic to deal with a monster is a one-hit kill, then there’s a problem with that monster.

4. Heavy AoE: You need to deal at least 25% of her hp (which can easily reach 40k just from base + runes, before towers and other buffs). Given how aoes tend to have less damage than single target nuke, Lushen is perhaps the most viable (indeed this argument often comes from Lushen user, some even use 2 Lushens), but not everyone can afford a Lushen. Again, see my argument above on using massive damage as the final solution.

5. Skill cooldown: Monsters with skill cd reset is not very common in the first place; in fact none are farmable. And she has very short cd anyway, a few turns later and her skills will be ready to use again, and that’s not counting Vio procs.

6. Debuffs (Stuns, Silence etc): Feasible, but Immunity is staple in arenas, non-stun debuffs may not be feasible if Veromos is present, and Chasun is often built with resistance anyway (not to mention her 40% base resist). You have to sneak the debuff between Immunity lapse and Cleanses, which can be tricky due to resists and Vio procs. 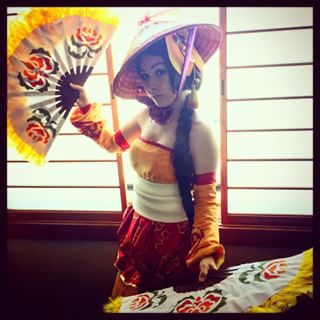 I believe that the biggest problem with Chasun is how these 3 traits of her synergizes so well, they necessitate a specialized tactic to deal with, which can be frustrating depending on her teammates and Vio procs:

1. Tanky due to huge base hp and how most players rune her hp hp hp with spd hp hp coming second, and with a group heal based on her massive hp which also buffs attack.
2. Having 2 powerful heals, thus giving a very small window of opportunity to neutralize her.
3. Very short cooldown compared to other healers, which synergizes so well with Violent runes.

Therefore, I believe that working around these 3 traits of her or eliminating one out of the 3 I’ve listed would be the best approach to balance her.